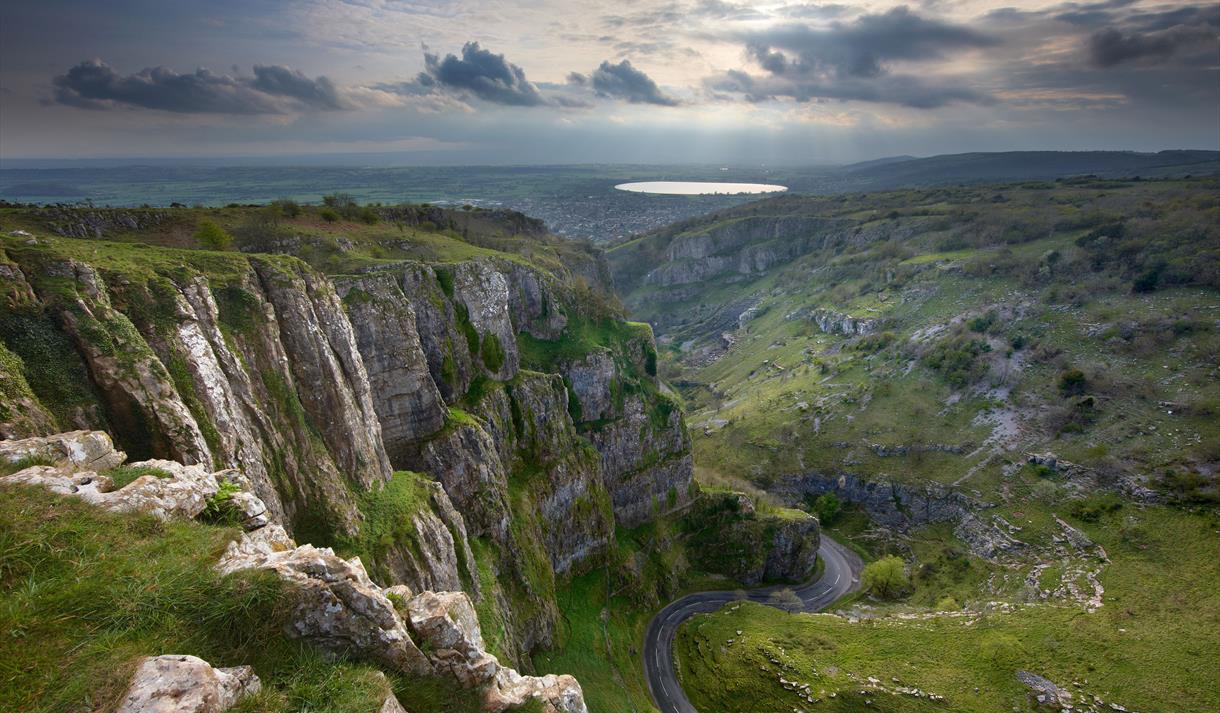 Visit Cheddar Gorge & Caves with the highest, inland limestone cliff formation and two of the oldest showcaves in Britain. Designated as an Area of Outstanding Natural Beauty, a Site of Special Scientific Interest and a Special Area of Conservation, Cheddar Gorge is rich in rare and endemic flora such as the Cheddar whitebeam and Cheddar pink and provides a haven for wildlife, such as the greater and lesser horseshoe bats, dormice and great crested newts.

Learn more about our prehistoric ancestors, take a stroll along the cliff-top or scale the rockface for a more extreme adventure.  Whether you are interested in nature, history or geology, or simply want to see breathtaking views, you’ll find plenty to do at Cheddar Gorge & Caves.

Explore the depths of Gough’s Cave with audio guides in English, Mandarin, Polish, German and French telling the fascinating story of its Ice Age creation, Stone Age occupation and Victorian exploration. See the pioneering journey that took mankind from primitive existence to the most successful species on the planet with Dreamhunters, a multimedia experience in Cox’s Cave. Immerse yourself in a cinematic journey of the gorge with Beyond the View or experience it for yourself by climbing the 274 steps of Jacob’s Ladder and following the Cliff-top Walk.

At the Museum of Prehistory you can learn all about the findings from prehistoric past made by archaeologists in the Cheddar caves. This includes the discovery of the oldest, most complete skeleton in 1903, known as Cheddar Man, dating back to the Mesolithic Age over 10,000 years ago.

You may have scaled epic rock faces and explored the depths of the Earth's crust. You may be a complete beginner, and the very thought sends shivers down your spine. Either way, Rocksport at Cheddar gives you the opportunity to step out of the ordinary and achieve something incredible.

From outdoor climbing, on naturally crafted cliff-faces, to taking a leap of faith into the Black Cat Free Fall, to exploring the underground depths of Cheddar's awe-inspiring maze of cave chambers. Rocksport represents exploration, achievement, camaraderie, and above all— fun.

You’re not brave if you’re not scared. This is the Rocksport mantra. Jump in.

Want to challenge your brain power? Think you’ve got what it takes to unravel the mysteries, solve the clues and beat the clock? Have a go at beating The Vault and escape from being Caved In with Cheddar Gorge & Cave’s two escape room games.

From: London, South Wales, The North, The Midlands, South West

Cheddar Caves are at the bottom (south west) of the Gorge

National Cycle Network Route 3 crosses B3135 at the top of Cheddar Gorge near Priddy.

Take the train from Bristol (Temple Meads) to Weston-super-Mare

For train times, contact the National Rail Enquiry line on 08457 484950 or visit www.nationalrail.co.uk

From Weston-super-Mare, Axbridge and Wells

From Street, Wedmore and Shipham

We recommend you arrive before 11.00 am especially during the school holidays and on Bank Holidays to ensure you find a space easily.

* Monday to Sunday 10am-5pm
Open all year except Christmas Day