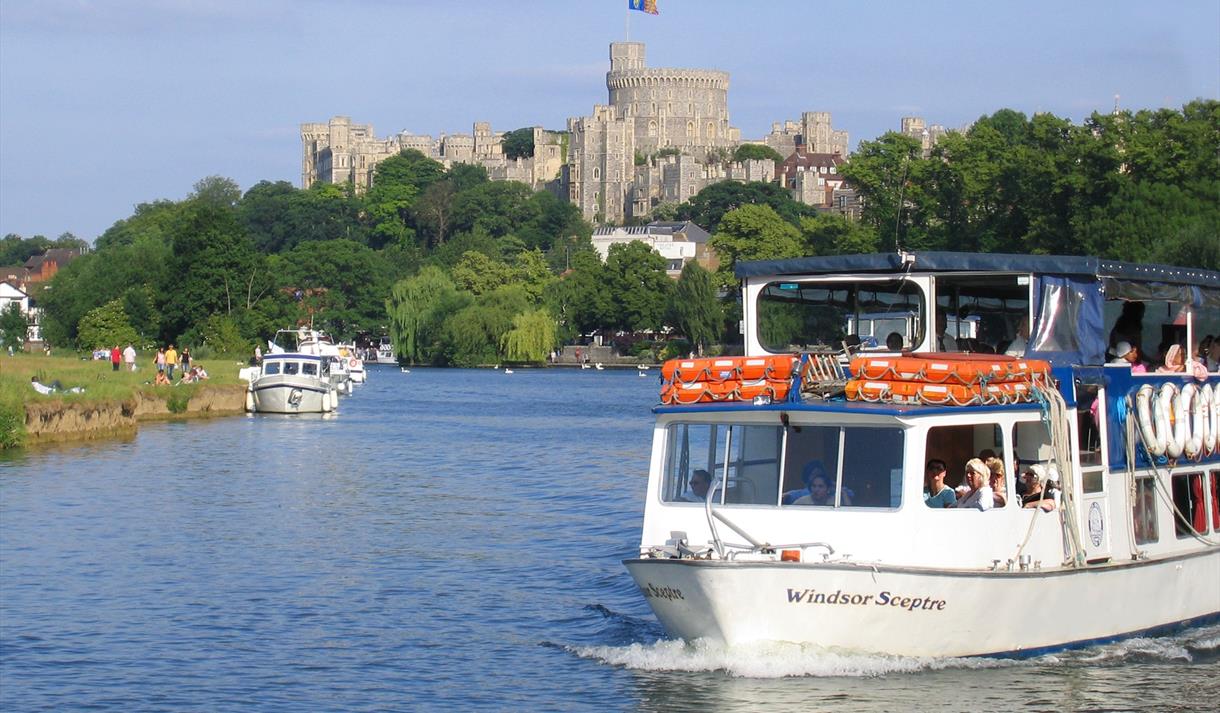 You can’t say the word Windsor without conjuring up images of the world's oldest and largest inhabited castle, royalty, horse racing, Changing the Guard, the River Thames and Eton College.

Windsor thrives on its royal patronage, rich cultural heritage, stunning architecture and beautiful natural scenery.  Add to this an abundance of quaint one-of-a-kind shops and culinary scene headed by the likes of Heston Blumenthal and you’ll have a reasonable idea of the treats in store for you in the Royal Borough of Windsor and Maidenhead.

We like to think of the Royal Borough of Windsor and Maidenhead as ‘London’s Country Estate’ – a relaxing haven, close to London Heathrow airport and near enough to enjoy the hustle, bustle, sights and sounds of the capital if you wish.

Windsor Castle dominates our skyline and a visit should be top of your list.  It’s a breath-taking place to explore – no wonder it was the recent setting for two royal weddings!

Windsor Castle is one of the official residences of His Majesty The King as well as a venue for ceremonial and state occasions.  The castle spreads over the equivalent of 269 tennis courts and is more like a fortified town. It contains magnificent State Apartments furnished with treasures from the Royal Collection and St George's Chapel, a Royal Peculiar and one of the most beautiful ecclesiastical buildings in England. It is the burial place of 11 monarchs including Queen Elizabeth II, Henry VIII and Charles I.

Windsor is the only place outside London where you can watch Changing the Guard, the process where a new Castle guard exchanges duty with the old guard. Usually accompanied by a band, it takes place throughout the year, weather permitting and except Sundays (check the schedule which changes month by month). Outside of the castle, the best viewing point is the Corn Exchange at Windsor Guildhall at around 10.50am. From inside the Castle, you can watch the actual changing ceremony outside the Guardroom in the Lower Ward at 11.00am.

The most beautiful and historical stretch of the River Thames meanders through 20 miles of the Royal Borough and a boat trip is far and away the most relaxing option to enjoy the area.  Villages such as Hurley, Cookham and Bray remain unspoilt and are full of hidden treasures to discover such as The Stanley Spencer Gallery dedicated to one of the greatest British artists of the 20th century.  Join a French Brothers passenger cruise and see the sights; get close to nature on an escorted kayak tour; explore road and river on an amphibious duck; or hire a private boat with your own skipper and picnic for some added luxury! With some beautiful riverside hotels and waterside dining options the world is your oyster.

Talking of dining, the Royal Borough is a truly tasty destination with a wide range of fabulous restaurants, bars and cafes.  The village of Bray may be small but it packs a culinary punch as it is home to a selection of restaurants and pubs boasting seven Michelin stars between them!  Think of the Roux family and Heston Blumenthal and you’ll find them both here in the Waterside Inn and the Fat Duck respectively.

If you love countryside then you will love Windsor Great Park with its 5,000 acres of open space.  There are numerous features and monuments in the Great Park like the Copper Horse, the Obelisk and a set of 2,000-year-old Roman ruins imported from Libya.  The towering 100-foot high Totem Pole at Virginia Water was a gift to Queen Elizabeth II from the government of British Columbia. It was carved from a 600-year-old Western Red Cedar tree by Indian Chief Mungo Martin, one of the finest craftsmen of Totem Poles.  The 250-acre Valley Gardens contain unrivalled collections of azaleas, camellias, magnolias and many other spring-flowering shrubs and trees as well as the largest planting of rhododendrons in the world.

Why not explore parts of the Great Park from the comfort of a private horse-drawn carriage?  Ascot Carriages offers scenic drives in a beautiful carriage previously used by Queen Elizabeth II's Equerry and Horsemaster. Windsor Carriages run tours from outside Windsor Castle and down The Long Walk to Home Park, a six-mile journey enjoyed by Royalty for centuries and exclusively shared with guests of Windsor Carriages by Crown license since 1849.

Hidden in the corner of the Great Park is The Savill Garden, one of Britain’s greatest ornamental gardens. It never fails to charm visitors who come to explore its 35 acres of contemporary and classically designed gardens and exotic woodland.

Developed under the patronage of Kings and Queens, The Savill Garden was created in the 1930s by Sir Eric Savill and is a place of constant discovery, and of interlocking gardens, containing distinctive areas such as Spring Wood, The Summer Wood, The Hidden Gardens, The Summer Gardens, The Glades, Autumn Wood, The Azalea Walks and The New Zealand Garden.

Another jewel in the crown is the famous Cliveden Estate – the stunning National Trust gardens here are set high above the River Thames and the historic home of the Astor family is now a five-star hotel.

The Royal Borough of Windsor and Maidenhead is also home to not one but two famous racecourses – Ascot and Royal Windsor – putting racing very much at its heart and soul. Queen Elizabeth II had a lifelong passion for horses and so it follows that racing and other equestrian events are hugely popular in the Windsor area!

While out riding, Queen Anne (subject of the recent film The Favourite) noticed the potential that the open heathland around Ascot, not more than 5 miles from Windsor Castle, would be ideal for “horses to gallop at full stretch”. She subsequently founded the world-famous racecourse here in 1711.  Today Royal Ascot, is a national institution and centrepiece of the British social calendar. The royal party attends each day, arriving in horse-drawn carriages.

There is yet more to discover just across the bridge in Eton.  Famous of course for its boys’ school which dominates the north end of the town, there is much to discover.  Take a stroll along the High Street and back and you will find hidden gems such as an original marker for the first-ever modern marathon route from Windsor to London from the 1908 London Olympics, Sir Anthony Gormley’s Edge II statue attached to Common Lane House and Timbralls where James Bond creator, Ian Fleming, lived during his time at Eton.  Coincidentally the lamp post outside the house is numbered 007!

Keeping the children entertained is not always easy but at Legoland Windsor Resort they can be heroes of their very own adventure, flying through the treetops to escape fearsome dragons, or joining the Viking fleet and riding the churning rapids. The whole family will enjoy some high energy fun at the Fire Academy and the acrobatic entertainers at the pirate themed Stunt Show. Everyone will be fascinated by the incredible LEGO® models throughout the park. From comical camels to world land marks and a yellow submarine, it’s amazing what can be built with millions of LEGO bricks!  With over 55 interactive rides and attractions, there’s just too much to experience in one day!

And if shopping is more your thing you’ll find variety, choice and quality here in the Royal Borough with a fantastic range of independent stores as well as top High Street names and international brands.

With so much to explore and discover why not stay a few days?  You’ll find inspiration for all sorts of wonderful events, attractions and superb accommodation options on www.windsor.gov.uk   We look forward to offering you the Windsor Welcome!