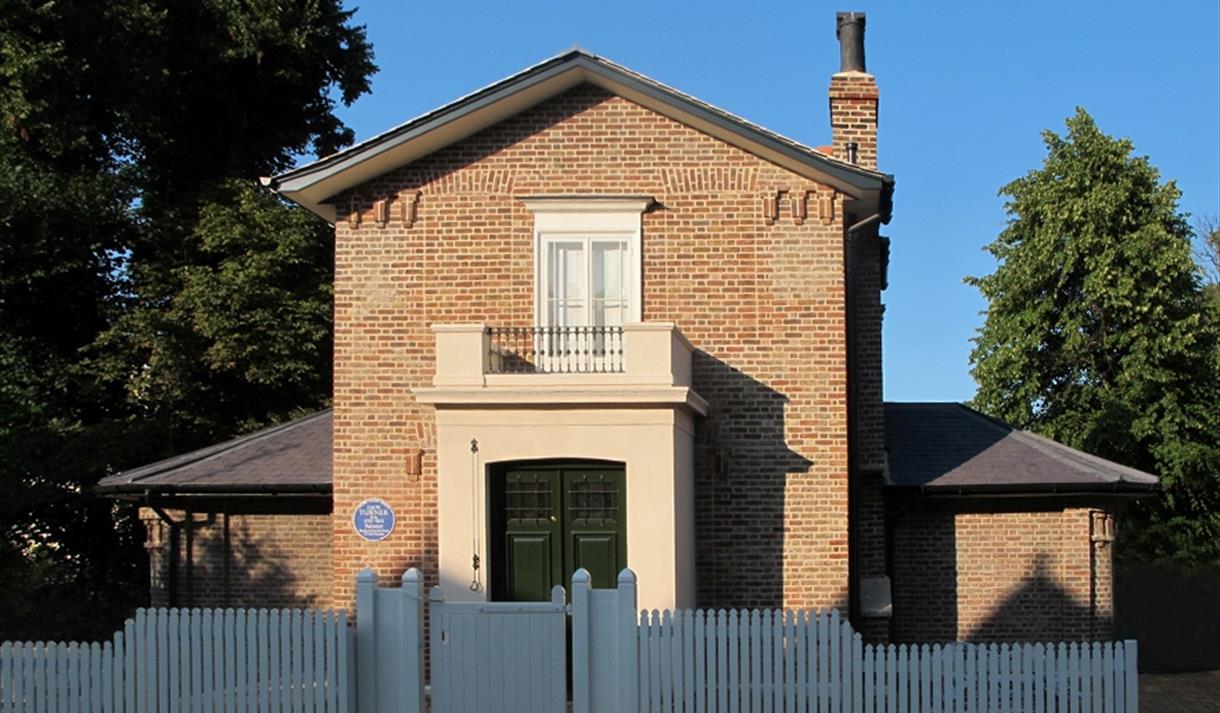 At Sandycombe Lodge our aim has been to create the quiet, domestic space that Turner used as his retreat from the London art world.  The architecture of this little building is quirky, reflecting Turner’s own designs but also the influence of his good friend, John Soane, and is worth close attention. Turner made many sketches before finally arriving at his final design, and these are now brought together in single facsimile sketchbook.

Many rich stories have emerged during our researches into the years Turner spent at Sandycombe, such as those relating to the Napoleonic wars.  Some of the beautiful etchings from his Liber Studiorum are on display here, several of them of them responding to those troubled years when England was under threat of invasion, along with beautifully crafted models of ships, variations on those which Turner had here.

In Turner’s time, Sandycombe stood on a large plot of land, bordered by two huge estates.  His grounds have now been built over, as have the estates – we have brought back the open views he would have had by digital technology.  The small remains of the once-large gardens have now been beautifully planted.

Friends came to Sandycombe, many of them fellow artists, and our ‘speaking clock’ captures their reminiscences.  In the basement, domain of Turner’s father, a piece of digital magic brings ‘Old Dad’, housekeeper, gardener and general factotum at Sandycombe, into our space.

In 1807 J.M.W. Turner, then a young but already well-known and commercially successful painter, bought two plots of land on the edges of two large estates between Twickenham and Richmond Bridge. It was six years before he finally built Sandycombe Lodge on the larger plot, to his own designs, which can be traced through his sketchbooks, now part of the Turner bequest at Tate Britain. Here he fulfilled his wish – ‘if he could have his life again, he would have been an architect’. Turner installed his father, Old William, who tended the Sandycombe garden and kept house. Turner used this peaceful spot, with no other buildings nearby, to retreat from the pressures of the London art world, to walk and sketch along the Thames, to fish with one or two close companions, and occasionally to entertain larger groups of friends.

One of the fishing companions was John Soane, 20 years older than Turner, and a fellow Royal Academician. Soane was the architect of the Bank of England, and many other prestigious commissions. His influence on Turner’s designs at Sandycombe was very strong, particularly seen in the series of arches in the small entrance hall and corridor, and in the graceful top-lit stair. It would have taken Turner about half an hour to walk to the top of Richmond Hill, sketchbook in hand, and the Arcadian landscape on this part of the Thames inspired a number of beautiful paintings, the most expansive being England: Richmond Hill on the Prince Regent’s Birthday, painted in 1819 (Tate Britain).

In 1826 Turner sold Sandycombe Lodge to his nearest neighbour, Joseph Todd, the owner of Twickenham Park. Todd enlarged the little villa and it was rented out, then sold many times over the next 100 years. From the 1880s onwards, the large grounds diminished as a new suburb, St Margaret’s, grew up around the railway station.

Sandycoombe Road is situated off Richmond Road between Richmond and Twickenham. If travelling by car we recommend that you park at Marble Hill House park and walk. Turner’s House is approximately five minutes walk away.

Getting here We advise using journey planners to source the best route on your day of travel via public transport, to allow for any unforeseeable transport changes. However, please see our brief guidance below;

By Train Mainline & Overground/Underground (District Line) trains all run to Richmond station. The nearest station is St Margarets , which is a short walk away.

By Bus From Richmond station, the H37 stops at Sandycoombe Road. Frequent services also run on the 490/H22/R70/R68 where you should alight at Marble Hill Park/Crown Rd stop, it is then a 3 min walk.

On Foot From Richmond, it is just over a mile to walk; take the tow path which leads you into Marble Hill Park.

PLEASE NOTE: We have one parking space for disabled badge holders only, which must be booked in advance by emailing info@turnershouse.org.

Within the house, only the ground floor drawing room is fully accessible for visitors with mobility issues. Our garden, and our toilet are also fully wheelchair accessible. We have a virtual tour available via our tablet, so other rooms and objects can be explored digitally.

* Hourly slots on the hour 10am, 11am, 12 noon, 1pm, 2pm, 3pm.
May 22nd to 5th September
Pre-booking essential. Please visit our website www.turnershouse.org